Skip to content
Home
Vitiligo
Is Vitiligo common and contagious?

The skin depigmentation order called Vitiligo has affected around 1-4% of the worlds’ population with the numbers increasing by the day. In America, as of year 2010, an approximate of 2 million people have been recorded to be suffering from Vitiligo. This raises a questions in people’s minds that whether Vitiligo is a common and contagious or not?

However, this condition is not caused by a germ or virus that can be transmitted from one person to another; thus, voiding the possibility of being contagious.

People are generally not comfortable in greeting Vitiligo patients with gestures that involve physical interaction such as shaking hands. But these fears are totally unnecessary. Touching someone who is suffering from this disorder will not put someone to any risk of acquiring it. Such behavior may however result in lowering the self esteem of these patients.

Who is affected by vitiligo and is vitiligo inherited? 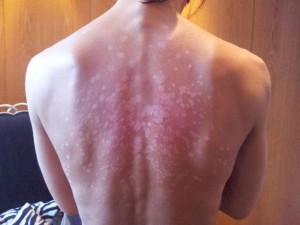 About 0.5 to 1 percent of the world’s population have vitiligo. The average age of onset is in the mid-twenties, but it can appear at any age. The disorder affects both sexes and all races equally; however, it is more noticeable in people with dark skin.

Vitiligo seems to be somewhat more common in people with certain autoimmune diseases, including hyperthyroidism (an overactive thyroid gland), adrenocortical insufficiency (the adrenal gland does not produce enough of the hormone called corticosteroid), alopecia areata (patches of baldness), and pernicious anemia (a low level of red blood cells caused by the failure of the body to absorb vitamin B12). Scientists do not know the reason for the association between vitiligo and these autoimmune diseases. However, most people with vitiligo have no other autoimmune disease.

Vitiligo sometimes runs in families. Children whose parents have the disorder are more likely to develop vitiligo. However, most children will not get vitiligo even if a parent has it, and most people with vitiligo do not have a family history of the disorder.

The occurrence of Vitiligo is dominantly found between the ages of 20 to 40 years. However, a specific age does not determine its possibility. It is commonly understood that the most initial visibility of vitiligo can however be found after 20 years of age but not later than forty.

Similarly this disorder cannot be constricted to anyone with regards to their gender or ethnicity. There are no perfect boundaries that mark the diagnosis of vitiligo. Although, skin discoloration becomes more prominent in populations with darker complexions but this does not mean that the prevalence of vitiligo can only be found within a certain skin color, gender or race.

Vitiligo cannot be solely considered as an inherent disorder either due to the presence of multiple causative factors. But one out of five patients with Vitiligo is found with at least one close blood relation suffering from the same.