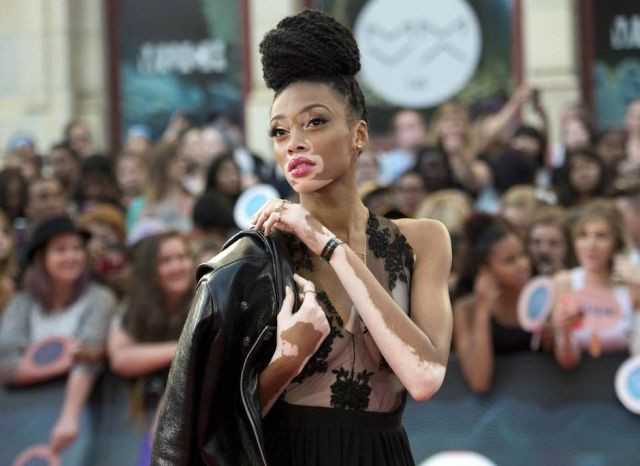 Chantelle Brown-Young aka Winnie Harlow,, America’s Next Top Model contestant, is not your average 19-year old. She is a vitiligo patient since second grade.

The Toronto native has launched a modeling career and is a contestant on the new season of “America’s Next Top Model,” Tyra Banks’ reality-TV show, which premieres Aug. 18 on the CW Network.

Chantelle Brown-Young from Toronto was diagnosed with vitiligo – the same condition Michael Jackson had – around the age of four and said growing up she was cruelly nicknamed ‘zebra’ and ‘cow’ because of the white patches covering her face and body.

“It didn’t affect me so much when I was growing up because my family treated me as Chantelle with vitiligo. They didn’t really teach me about my skin growing up.”

In middle school and high school, she was called “cow,” “zebra,” “a lot of mean things. I started to go through puberty. You’re already having changes you don’t understand, plus this skin condition that I didn’t ask for that has to do with other people’s opinions and other people’s bullying.”

But thanks to her natural beauty she is now fulfilling her dreams of being a model. Her social network accounts reveal that she has already graced the catwalk dozens of times, starred in a music video and last month, she was photographed by Nick Knight, who has lensed everyone from Kate Moss to Karlie Kloss.

That all changed when she was 16 and was discovered by a Toronto photographer who encouraged her to model. “I was at the age still that I was worried about other people’s thoughts but I was trying to get out of thinking that way, to think about myself and that I should love myself … I was just growing into myself.”

From there, she tried to catch the eye of Tyra Banks. “I posted pictures on Instagram of all my modeling work. When I was really proud of a picture, I would ask my followers to tag her in those pictures … An assistant to the show basically told me that Tyra Banks was really interested in having me on the show.”

It is really encouraging to read about Chantelle Brown-Young. People like her prove it to the world that Vitiligo is not something life threatening and you can enjoy a normal life with vitiligo.